Welcome to The Knight Stalker; a blog where PNR Author Shelbie Knight chats about what she loves most - reading and writing!
Do you have a specific Author that you would like to see featured, or a book you would like Shelbie to review? Or possibly you would like to hear occasional updates on Shelbie's own personal journey on the road to publishing? Feel free to email any requests - it's all fair game!
On these pages, Knight rules and brings to life the sexy supernaturals from your wildest imagination! 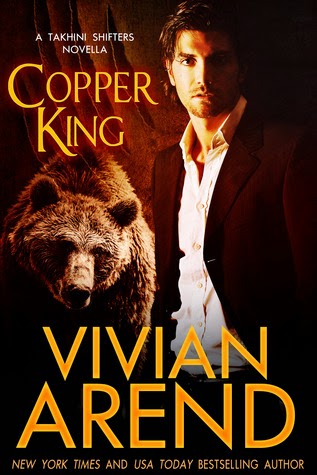 Three things make billionaire Jim Halcyon’s to-do list: women, work…and more women. It’s a perfect agenda for a rich shifter who has no problem letting his inner grizzly out to play. From the bright lights of Vegas, to the sophisticated action of New York—he’s got the money and the power to do anything he wants.

Anything, except resist the lure of Lady Luck, an ancient copper coin he gambles yearly to possess. Jim is determined to regain control of the pretty penny, and damn if he’ll let any bit of eye candy distract him from his goal. Not even the mesmerizing woman in the middle of the casino floor with the shimmering hair and enormous green eyes.

With a life-changing move ahead of her, Lillie’s finagled a temporary layover en route to her future. She’s got five days to soak in new experiences, and while Vegas is too big and shiny and loud for her shy bear self, she’s eager to do this up right. It’s the last chance she’s got to let her hair down.

Until his challenge begins, Jim is more than willing to oblige Lillie’s wish for a final fling. Only Lady Luck has some twists of fate planned for them both…

(I was provided an advance copy of Copper King in return for an honest review.)

Adorable story, of that there's no doubt. However, I hate to use a reference to the characters last name (Halcyon - a sleeping pill for those of you who may not know), but there were times where I felt almost as if I were ready to fall asleep.

Normally, Vivian's stories keep me on edge; the character's capricious, the sex scenes hotter than hell. However, in Copper King I found two cute bears who seemed like they were still in hibernation. Seriously? An alpha-male Grizzly should not be cute. I was expecting lots of growling (I did get some) and for him to be a bit more...demanding. Making matters worse, the way the story was written (technically - sentence structure) was stilling, affecting the overall flow of the story.

To explain what I refer to when I say stilling: rather than smoothing the way through a scene, blending, the sentence structure was abrupt, cutting the scene/thought/action right then and there. (Example) "She walked to the door. Opening the door, she stepped back." As opposed to a smooth transition that I normally see in Vivian's writing, this is what I experienced throughout Copper King. It made the entire story feel...abrupt. As if it was written in rapid speed, quick, get it out!

Additionally, the sex scenes were so quick and lacking such detail, I felt as if I were rushing through the experience with them. It was unpleasant. One minute he's pushing into her, the next it's over. So unlike VA and it only added to the abrupt, rushed feeling of the entire story. As I said earlier, the overall story is CUTE, but it felt like I was eating food made from a recipe that was lacking key ingredients - Vivian Arend's normally smooth transitions and HOT sex.

Because of this, overall I was left feeling...meh. Cute story with a great ending, good bi-play between the best friends (I am anxious for the next in the series, to see an ego-driven wolf brought back down to four paws), but Copper King was missing what I have come to expect from Vivian Arend.

If you like reading with sexy bears, a wolf with a playful attitude and light on the descriptive sex, this is the book for you!

Shelbie Knight
Seattle, Washington, United States
Welcome to The Knight Stalker Blog! I write Paranormal & Contemporary Romance, extending my love of reading to reviewing titles as well. I hope you enjoy my posts and please feel free to contact me with any requests!